You know when you have a BIG project, but one little part of it is just holding up the whole darn thing!?!

That's been this shelving unit for my studio.

It's a must. I feel like I can't organize anything until I have this piece installed.

But it just hasn't been getting done. A combination of me not making it a priority (but I have dishes to do and dinner to make and Doctor Who to watch!), crappy weather (it actually got wet in an unexpected rain and needed to spend a few days in the kitchen), and it just being a project with a lot of steps (sand, clean, wood filler, sand, clean, prime, paint . . . ). 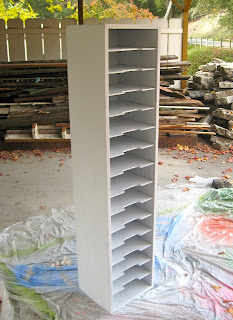 I'm stuck trying to decide if it's really really done or not. I've gone through a can and a bit of primer and FOUR cans of white semi-gloss RustOleum spray paint, and it's nowhere near completely covered. After the second can I basically gave up on the back and side that won't be showing, focusing on the side that will be showing and the shelves. But even the parts that will show aren't completely covered. I'm contemplating either getting another can or two, matching the paint and painting the top and sides with a brush, or just putting it in there as is and relying on my stuff to hide what's really going on. 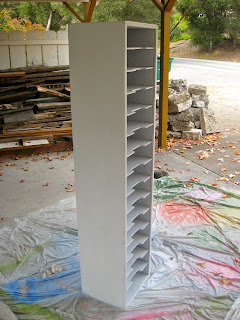 It will be filled with paper, probably cans of terpenoid and medium with live on the top, and I can put cork board on the side. But it just feels weird not finishing it.

Either way, I'm super excited that I've come this far, and I hope next week to show it in the studio!

In other studio news, I will soon be loosing my couch. }: It's awesome. Even with the tinted pink cushions, I really like the upholstery. It's comfortable. It's in great shape. But it's too long. One of the things that sold me on it in the first place is now the reason it's leaving. It basically tucks under my drawing table on one side of the room and blocks the bathroom door on the other. For now we could move it against the bathroom door, but this summer, when Brian starts working on the bathroom, we'll need access. May as well move it out now.

We have some plans for it before it goes on craigslist. I hope they pan out.