Hello! Well, this has been a weird week of sickness and crafting for other events (I'll talk more about this in my Monday Review).

Everett and I have been trying to shake this stubborn cold, so we had a few "sick days" of lounging around watching muppet movies. Not the thing to do if you're trying to be a productive artist/blogger. Oh well, sometimes my baby and I just need a little Gonzo.

Then, I finally decided to check out Pinterest, and oh man is that a time-drain! Got lots of cute ideas, though, that I think will be time and money savers in the future (like homemade Christmas gifts!).

But it got me thinking about Halloween costumes for Everett. Last year he was a porcupine. Brian and I spent HOURS gluing and painting quills. It's hard to imagine topping that (with less time investment), but I'm gonna try!

Last year we built his costume on a hoodie, which I love because it's so comfortable for the baby.

This year, I'm thinking of doing the same thing, but having him be a bird! I want him to be something he recognizes, since he knows so many animals and animal sounds (but this means octopus and dragon are out, that's ok.). I was showing him bird costumes online, and he would say, "caw caw!" So cute.

So my sketch this week is my costume idea: 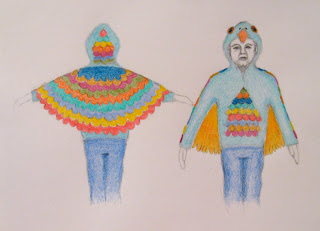 I took inspiration from this amazing feather cape. The original is for an older kid, so the end of the cape hooked over the kid's thumbs. Everett will only be 17-months-old, so that idea wouldn't fly (haha . . . pun intended). But I think it would be great on a hoodie.

I just put a few rainbow colors in the drawing to give you an example. I'm actually hoping to use all sorts of colorful patterned prints, like the original cape.

I'm thinking about dusting off my sewing machine for this one. I could make it all with hot glue, but if he loves it so much he wants to wear it again and again (which is just a fantasy on my part, of course.), it'd be nice for it to be sewn.

This isn't going to turn into a craft blog, I promise . . . although, from time to time, crafts will be my creative focus of the week. {: