This was an exciting week. I started painting again!

As I explained before, I got a new (to me) French easel, and it inspired me to do a little plein air painting.

Painting outdoors seemed like a great idea. And it was . . . great to get painting again. But it's hard with Everett. He's not old enough to play outside without being constantly supervised, so I could only paint when he was either sleeping or being watched by someone else.

It's not the best option right now, but I think it will be perfect when he's a little older and I can paint while supervising him playing outside.

It felt great to paint again. It's like riding a bike . . . almost. I'm needing to wrack my brain sometimes to remember the best ways to tackle a subject, but it will all come back to me.

I think being a mom will change the way I paint. I can't paint the big, time consuming paintings I did in college. This one is 11 x 14", and I spend maybe 1 or 2 hours applying paint. Set up and clean up took time (especially since I painted a little over two days). I just don't have the hours and hours I did before Everett was born.

I'm also excited to start a new painting rather than working on my old paintings from school (that's the only work I really did in the year we lived with my in-laws). I so enjoy the small size. My school paintings were quite big (smallest is maybe 30 x 39"), so I could never do more than a sketch in a few hours.

I'm also interested in experimenting with mediums. for the big series I was working on (still working on, really), I used no mediums, except a little terpeniod if I needed to thin the paint out. I started my first painting this way, and I avoided using any mediums from then on for fear of making one painting shinier than the others. Now I can experiment! 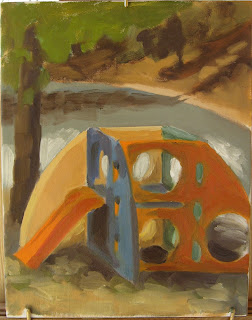 It's a silly little painting. It's not as precise or naturalistic as I'm used to, but I had to do it so fast. It's an interesting challenge. Make a painting you're happy with but that isn't technically up to your standards. ha.

But I guess as I continue to paint quickly, my technical skills will improve for this type of painting.

I started with a pencil sketch on the canvas, which I don't normally do. And I didn't like how the pencil mixed with the paint and "muddied" my lighter colors. I should have sketched in paint.

On the first day, I painted a sort of grisaille with neural colors that corresponded to the colors in the scene. Brown pink for orange, naples yellow hue for yellow, paynes gray for blue, terre verte for green, and a bunch of burt umber and white. This underpainting was probably also a waste of time But I wanted to get down as much as possible that day without knowing the shadow situation on the next day I got to paint.

The next day I got to paint was Saturday at about 12:30. The shadows weren't good, and they weren't good the rest of the afternoon. Unfortunately, I've been checking it earlier in the morning, and I thought afternoon would be better. I'm sure I saw good light on that play structure!

But I like painting it. I like the silliness of it. I like the colors. I like that it's geometric but imperfect. The angles aren't regular to the point where if I don't get the perspective right, the whole painting will fall apart. If I find better light . . . I think I've have found my haystacks! {:

I got a couch! It's a sweet couch too. Much nicer than I thought I could get for $45 on Craigslist! So nice, in fact, that I was a little annoyed it would be my studio couch, and would inevitably get paint on it. THEN we washed the cushion covers in warm water (because they're old couch cushions from a stranger with pets), and they got dyed PINK! Well, they got a little pink-er. So weird. The inside threads are maroon (which I don't get), and they turned the water blood red. The lady I bought it from said she had just washed the cushions (in cold water?). Oh well. MUCH less concerned about getting paint on it now. I doubt I will want to switch it for my living room couch anytime soon. {: But it's super comfortable. Long, and now quite clean!

Thanks to my in-laws and to Frank for helping move the thing!


But on to the most important thing that happened this weekend, my amazing husband painted!! After much sanding and cleaning of walls and trim, he was able to prime all the walls, paint 3 of the walls (one is going to be an accent wall, and I don't know what the accent is yet), and about 2 feet of the ceiling all the way around the edge (we decided to keep all the stuff in the room, paint the edge, then move the stuff and paint the middle). It's getting close! I actually need to start seriously considering my studio design!! Wow.
Posted by C. Asdel Cisneros at 8:00 AM